The recent apps screen has undergone a major change in MIUI 10. It looks a lot more different than what you have seen in MIUI 9 and other versions.

The recent apps are arranged side-by-side in the form of cards, which can be scrolled vertically to view more apps. With this sort of arrangement, Xiaomi was able to use a lot of space on the screen and you can view up to 6 Recent apps at a time on your screen. 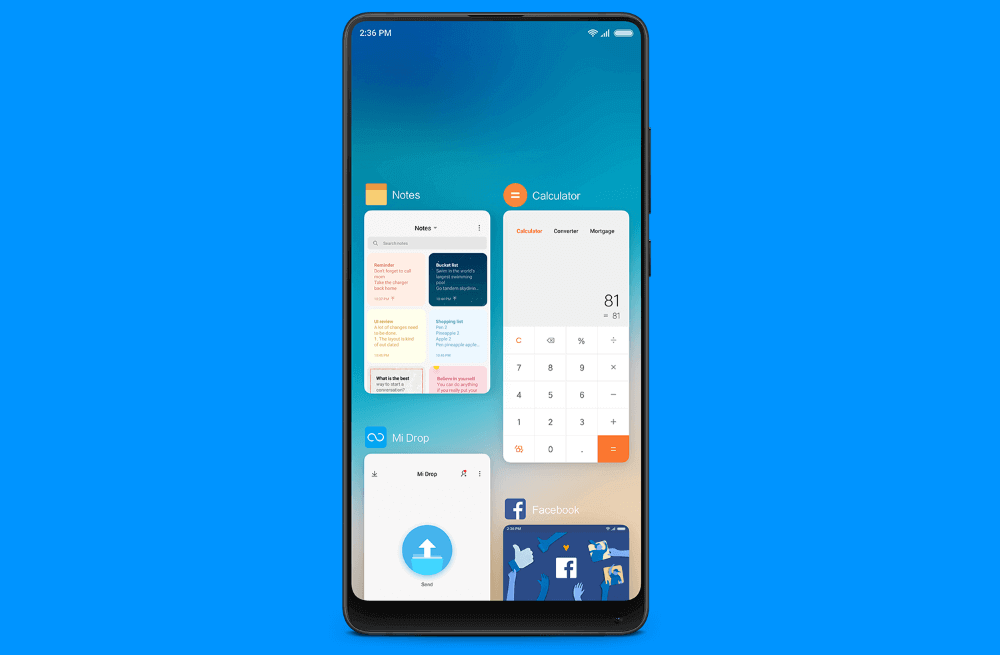 And if long tap on any recent app, you can see 3 buttons, which are Activating Split screen, View App info and Lock the app (Prevents an app from closing when you clear recent apps) respectively. As usual, there is a cleaner button at the bottom which will close all the recent apps and frees RAM.

Gestures are major addition to MIUI 10. There are lot of new gestures, which makes Navigation simpler. Most of these gestures are very iOS-ish, but still it makes your life simpler. Though all Xiaomi phones have Physical navigation buttons, you may not need them, if you get used to these Gestures. 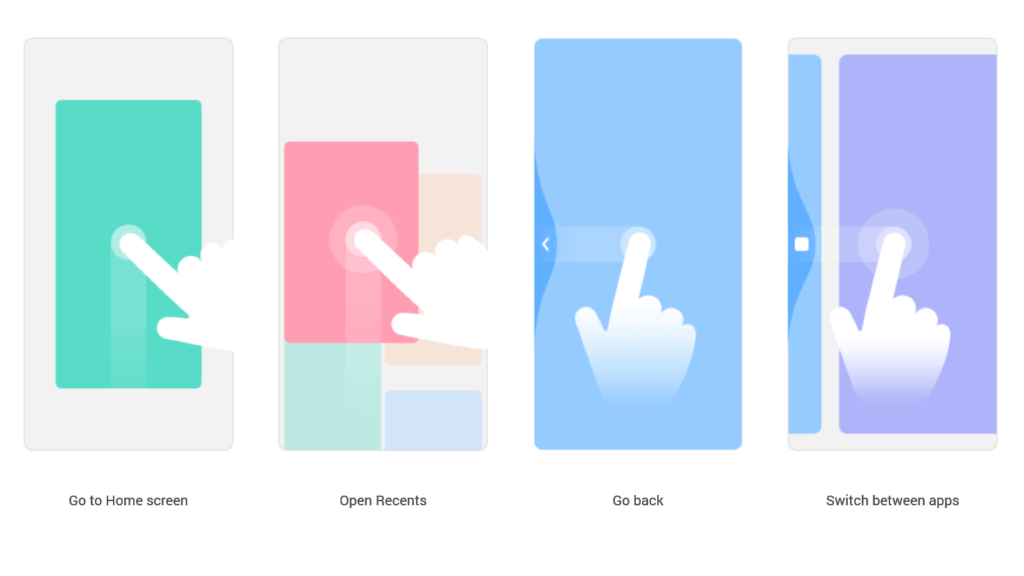 Following are the 4 New and useful gestures in MIUI 10 :

Surprisingly, Xiaomi has adopted UI features of Stock Android P in some areas like Notification shade and Volume Slider. As we already discussed above, there is a new Recent apps screen with Side-by-Side design.

The Notification shade is more rounded and very much like Android P. The Quick toggles area is separated with white background and rounded corners. The notifications also have rounded-corners. 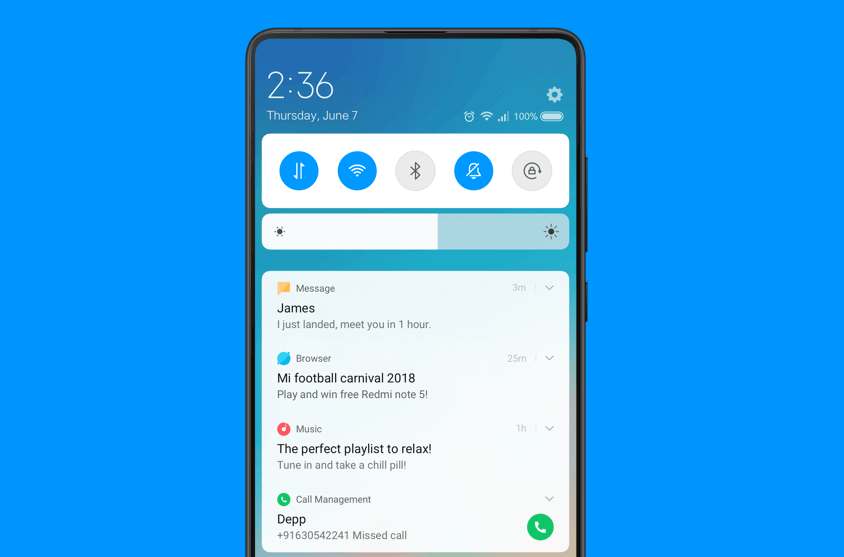 Also, there is a New Brightness Bar in the notification shade instead of Slider to adjust the Brightness.

The Volume slider is too adapted from Android P. It is vertical bar instead of a horizontal slider.

Besides the volume indicator, there is Silent button and another button, which lets you adjust other system volumes and DND mode, also you can set timer for Silent & DND mode.

Smart Phones with Dual-cameras usually offer a special mode called Portrait mode. What portrait mode does is it blurs out the background and gives bokeh effect (blurred background) similar to a DSLR camera.

But here the dual-cameras are required, one to capture the person photo and the 2nd one to separate the background from foreground. But, with MIUI 10 AI Portrait mode, you can take photos with bokeh effect even with a Single camera.

AI Portrait, which uses Artificial Intelligence to analyze millions of photos to get a better understanding of, what is background and what is not. So it then uses this data to identify background and unfocus it (add blur).

Xiaomi AI portrait works with both front and rear cameras. 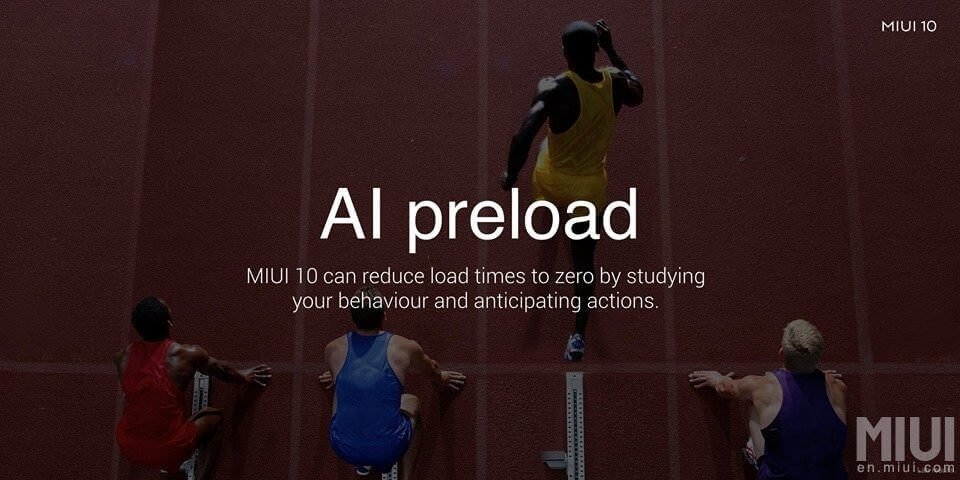 So, it preloads the apps which you are going to open, beforehand. So when you open an app, there is no need to load it.

This significantly reduces the load time of apps and sometimes also makes it possible to launch an app in almost Zero time.

Xiaomi added its own virtual assistant back in MIUI 9. Now in MIUI 10, it is powered by Artificial intelligence, which makes it more powerful. Xiaomi calls their new AI-powered voice assistant as XiaoAI.

Just like most voice assistants like Siri, Google Assistant, it can do many standard Smart assistant tasks with ease. Xiaomi also posted a quick video of XiaoAI voice assistant on YouTube.

Sad thing is that XiaoAI is only designed for the Chinese market, which means it only supports Chinese language and Chinese products like WeChat as of now. But, if you are interested to try XiaoAI anyway, you need to install the MIUI 10 Chinese beta ROM instead of Global Beta. 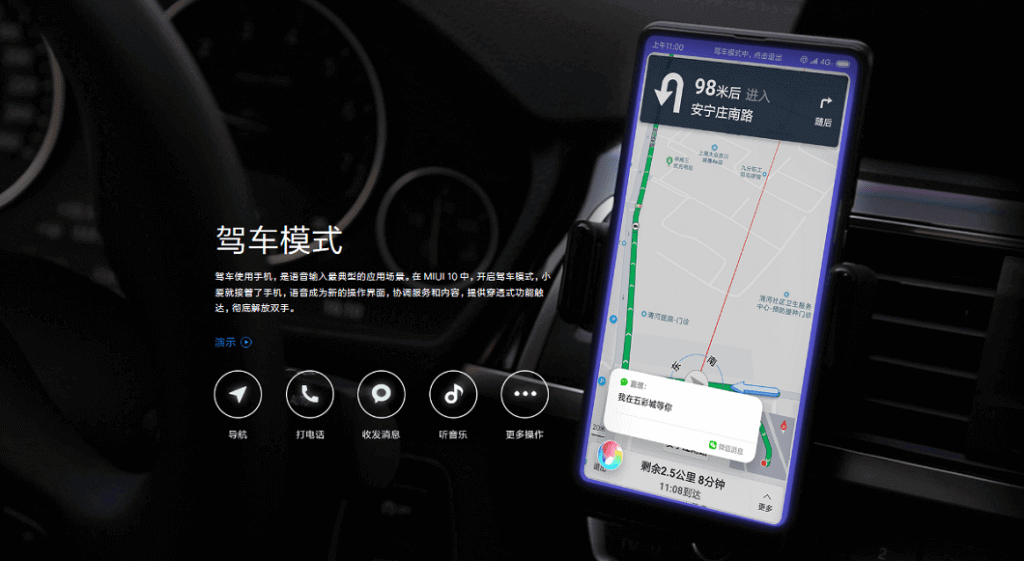 Car mode is an Experimental feature which lets you operate your phone Hands-free and avoid distraction while driving. And as you have expected, it is the Voice assistant, XiaoAI which takes your commands and perform actions. Which implies it might be only available in Chinese.

With Car mode, you can do some standard stuff which you might do while driving like Navigation on Maps, play Music etc. As I said, Car mode is an experimental feature. So if you want to try it, you can activate it in MIUI lab app. (MIUI lab is an app through which you activate and use experimental features that are still under development.)

In MIUI 9, there was a Mi Home manager to control only Mi branded smart home devices like Mi Air Purifier. But in the new MIUI 10, Xiaomi added support for a wide range of Smart home device brands.

Xiaomi says its new Smart Home manger supports 590 different Smart home brands. Which means you can control all your Smart home devices from one place instead of installing a separate app for each different-brand device.

A Picture-in-Picture mode is that you can view Videos or Maps or other apps in the Small floating window while using the other apps at same time. (Mind you, I’m not talking about split screen). 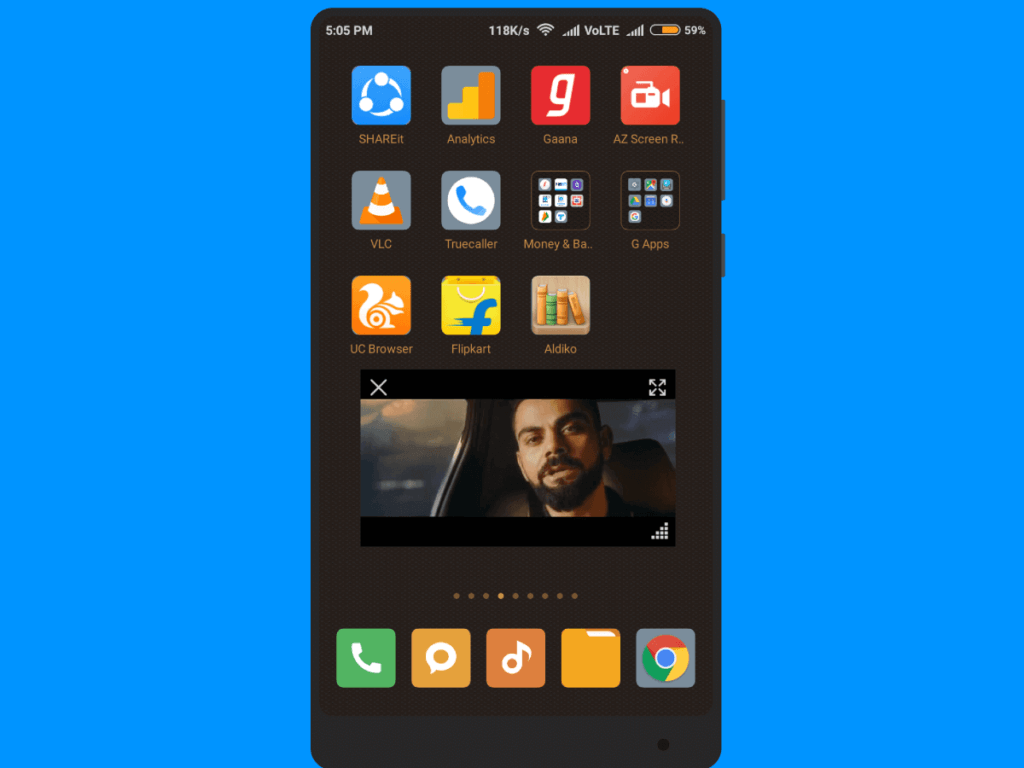 There is already Picture in picture mode within Mi Browser since a long time in MIUI 8 and MIUI 9. But you could only use it for Videos played through Mi Browser. It doesn’t work with other apps. Later Google added PIP to Android Oreo 8.0. But wasn’t added in later versions of MIUI 9.

Finally, now in MIUI 10, you can use a full-fledged PIP mode with other apps too. Now you can still view Maps while texting on WhatsApp or watch video while still checking your Mail.

Another Android Oreo feature that has been introduced in MIUI 10 is the Auto-fill feature.

Auto-fill is feature which lets you automatically fill saved User names and Passwords that you have saved to sign . Autofill works by default using Google Autofill data that you have saved in Chrome browser. But you can use other Password managers like Lastpass, Dashlane, 1Pass etc.,

Previously these password managers used workarounds like Making their own keyboard apps to insert Passwords. But with system-wide autofill, you can now insert username & Passwords with Ease. 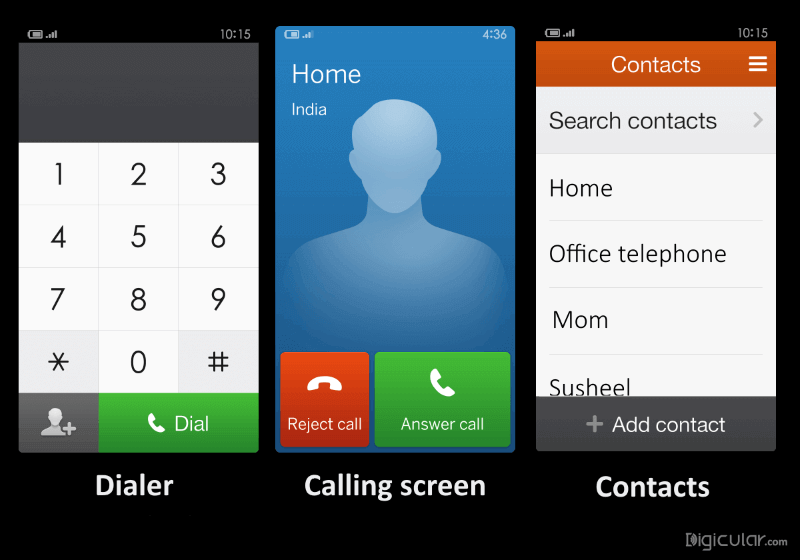 back in MIUI 7, you had to restart your phone in order to activate lite mode. But now, you don’t need to restart.

MIUI 10 ships with a theme called Limitless. Though it is already available in MIUI 9, they added live icons animations in MIUI 10, which was not there before. Besides themes there are some new wallpapers too.

Also there are some new tones for Notifications and system sounds. Xiaomi focused more on this aspect. They added sounds for some actions like Deleting too. New sounds are inspired from nature sounds like sound of Water droplets, Sand etc.

Also, they showcased a demo in which the sound of Droplet decreases if there are more notifications. So it would sound like many drops falling instead of one.

Apart from the above features and changes, there are some of new Indian specific features in MIUI 10 which was announced at Globallaunch of MIUI 10 in India.

You receive SMS from services like Banks, E-commerce sites etc., but you never have to reply to them. So it makes no sense to have reply option for such chats.

Xiaomi says it supports about 100 brands as of now for this feature.

To keep up with digitalizing India, Xiaomi integrated Paytm into the Camera app. When you want to pay at a store using Paytm, just open Camera app to scan the Paytm QR code of the store and it will take you directly to Paytm app payment page. 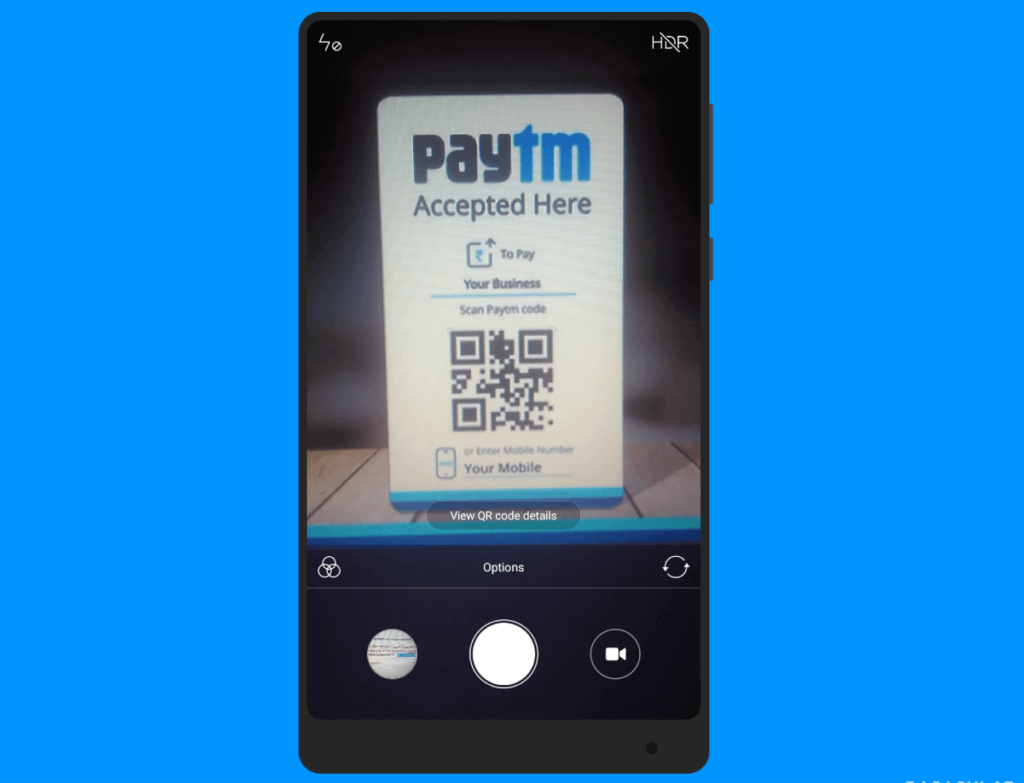