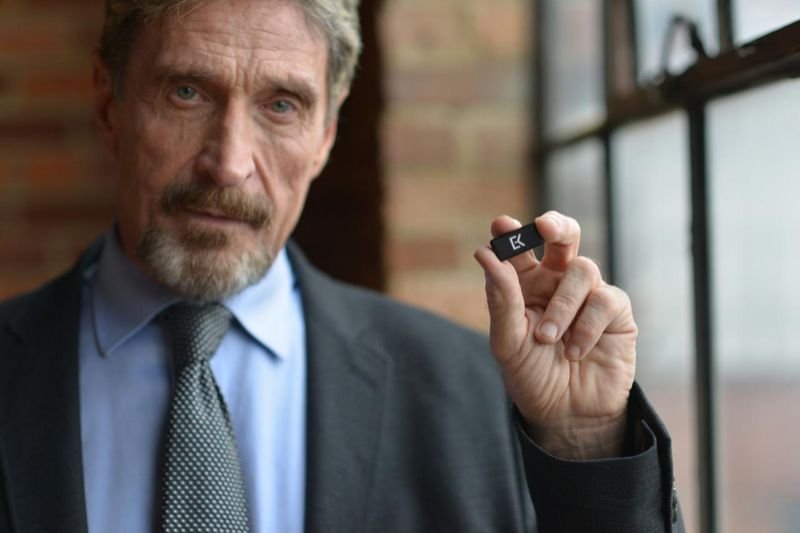 John McAfee, once known and respected for his popular computer antivirus software, has slowly devolved into a walking bulletin board of crazy-person quotes, both in the field of tech security and elsewhere.

This week, McAfee — currently running for president of the United States of America, by the way — chimed in on the fresh Apple v. FBI debate, questioning in an op-ed on Businessinsider.com why, instead of asking Apple to unlock the phone belonging to the San Bernardino shooter, the FBI couldn’t simply “crack the encryption on its own.”

He went on to reason:

With all due respect to Tim Cook and Apple, I work with a team of the best hackers on the planet. These hackers attend Defcon in Las Vegas, and they are legends in their local hacking groups, such as HackMiami. They are all prodigies, with talents that defy normal human comprehension. About 75% are social engineers. The remainder are hardcore coders. I would eat my shoe on the Neil Cavuto show if we could not break the encryption on the San Bernardino phone. This is a pure and simple fact

We’re not tech security experts, but the suggestion that McAfee and Co. could just pop open a phone that the government has invested months attempting to crack sounds dubious. Of course we’re also not surprised that a man once accused of murdering his neighbor for allegedly poisoning his dogs is coming up with such a banger of a claim. Sensationalism is kind of his thing.

Case in point: Here are some headlines of stories (with links) containing other questionable things McAfee has said publicly in the past:

1. World War III Will Be Cyber War That IS Could Win, John McAfee Says

5. John McAfee Says He Has Disguised Himself as a Guatemalan Street Vendor With a Limp

8. ‘I Promise You I Will Win,’ Says Completely Sane Presidential Candidate John McAfee

9. John McAfee Says He Can NSA-Proof Your Communications for $100

11. McAfee: ISIS to Unleash Tens of Millions of Jihadi Hackers on West in Blitz Worse Than Nuclear War

…Wait, that last one actually sounds pretty right on.