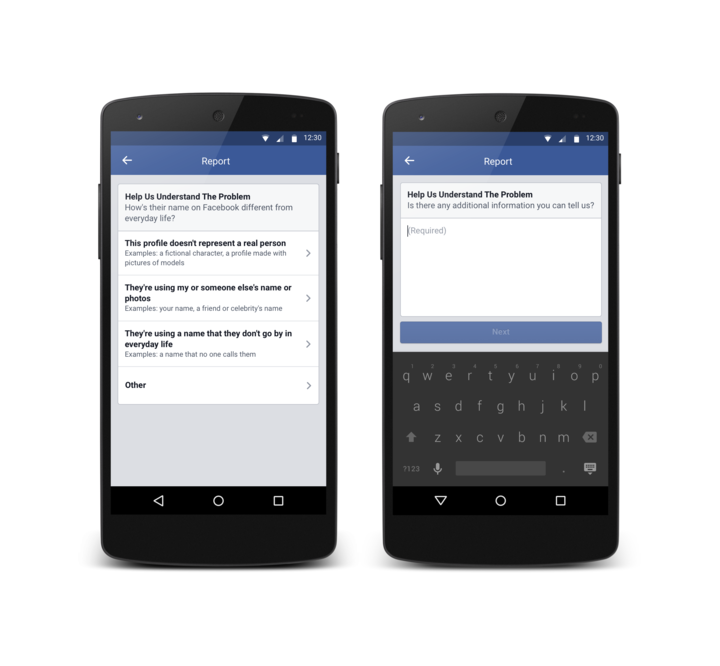 In late October, Facebook promised a number of enforcement changes to its controversial ‘Real Names’ policy, which had come under fire for its tendency to unfairly remove people from the platform. Today the company is rolling them out.

The policy, which requires people use their “authentic name” on Facebook, was being enforced with such rigidity that people with special circumstances – including members of the trans community and advocates for certain political causes – were often subject to process hell and long-term account suspension when reported as violators of the policy.

Facebook is rolling out its new enforcement procedures, which add a more human aspect to the “name confirmation” process, with the intent of easing the road back to the platform for those unfairly reported under the policy. Facebook is not, however, changing a word in the letter of the law.

“We want to make it easier for people to confirm their name if necessary.”

“We want to reduce the number of people who are asked to verify their name on Facebook when they are already using the name people know them by,” the company said in a blog post. “We want to make it easier for people to confirm their name if necessary.”

The enforcement changes are significant. Facebook is adding a “I have a special circumstance,” option for users reported as violators of the policy. When people are asked to “prove” their name and select that option, Facebook will put the case in the hands of its most experienced support representatives who will receive special training.

Facebook is also forcing people who report a “Real Name” violation to provide context along with their report, a change which should help cut down on instances of the policy being used to inflict harm on others. The company is also promising to not remove a person’s account as long as they are engaged with a support representative.

The enforcement changes were promised after Facebook received a sternly worded letter demanding action from several groups including the Electronic Frontier Foundation and Human Rights Watch. The letter called the policy “broken,” and said Facebook “maintains a system that disregards the circumstances of users in countries with low levels of internet penetration, exposes its users to danger, disrespects the identities of its users, and curtails free speech.”

Though the enforcement changes will likely be welcome, it’s still unclear whether they will be enough to substantially change the negative experiences of those affected by the policy.

The changes also seem to have overlooked some key issues, such as the fact that a person does not have to be Facebook friends with someone (the bedrock of connection on the platform) to report them as a real name violator. The company is also largely reliant on user reports, and it’s difficult to imagine people would cite people to Facebook unless they are upset with them in some way.

Finally, Facebook requires significant documentation for someone to prove their name, which can be impossible to produce for people with shifting identities, such as those in the trans community, and political activists who use a pseudonym for safety.

In an email, Facebook sent along a number of quotes from groups approving the moves, including one by GLAAD CEO & President Sarah Kate Ellis, who said:

“By taking important steps to improve its name policy, Facebook is once again demonstrating a strong commitment to inclusion and respect for LGBT users.

GLAAD looks forward to our continued work with Facebook to further improve on this policy and ensure that the world’s largest social network remains a place where all people can feel accepted and safe to be their authentic selves.