It’s Google’s most gorgeous product ever, but it has drawbacks!

The good: Comfortable keyboard with adjustable angles; Gorgeous design and display; Runs the latest version of Android
The bad: Expensive when paired with keyboard; Gets warm quickly
Who should buy: Those seeking a high-end Android tablet for productivity
The bottom line: The Pixel C is a well-built and attractive Android tablet aimed at productivity, but the combined cost of the tablet and the keyboard is high

Google creates the software that powers millions of Android tablets, but it has never actually made a tablet of its own — until now. The Pixel C, a $500 Android tablet that launches Tuesday, marks a change for Google in two ways: Not only is it the first tablet Google has ever created on its own, it’s also the first Pixel product to run on Android rather than Google’s Chrome OS.

Google’s Pixel lineup was born in 2013 with the $1,299 Chromebook Pixel, a high-end Chromebook laptop that received high marks for its dazzling high-resolution screen. That device, unlike the Pixel C, ran on Chrome OS, stripped-down desktop software designed for browsing the web and running light apps.

Now, amid rumors that Google might merge its Chrome and Android software, the company has released its first Pixel product powered by Android. It’s also the first Google-branded tablet that’s catered toward productivity. The Pixel C, which bears some resemblance to Microsoft’s Surface lineup, works with a special $149 magnetic, adjustable keyboard.

Here’s a closer look at what it’s like to use the Pixel C.

How it looks and feels 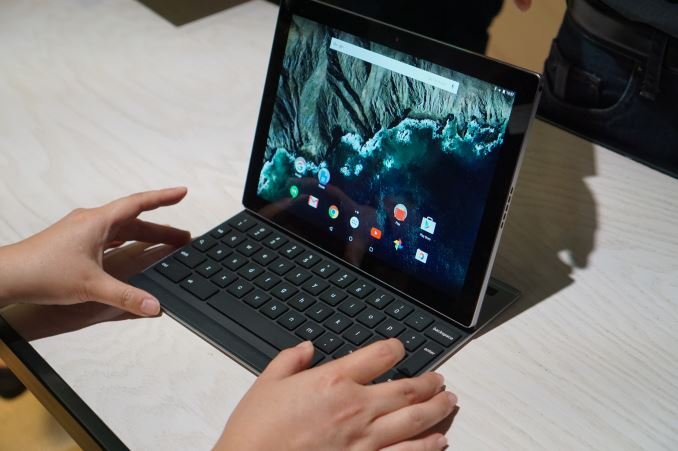 Google’s Pixel C is sleek, lightweight, and powerful. It’s a member of the Pixel family just like Google’s Chromebook laptops, which explains why the Pixel C features a similar brushed metal design. It even has the same glowing light bar as the Chromebook Pixel, which is a thin strip located on the back of the tablet that lights up in Google’s signature colors when the display is turned on. This light bar also serves as a battery indicator — if the tablet is only 50% charged, the bar will only be illuminated halfway.

The Pixel C’s screen is stunning and sharp. Colors look rich and vibrant from every angle, although the display sometimes catches glare because of its glossy look.

It’s clear that Google paid attention to the details when creating the Pixel C. For instance, the power and volume buttons are easy to reach whether you’re holding the device in portrait or landscape mode. Consumers are likely to appreciate little touches like that.

One thought on “Pixel C Review: Google’s New Tablet Is Great, But Not for Everyone”