After teasing briefly, Samsung has finally launched the Iron Man edition of its Galaxy S6 Edge and it looks super-cool.

The phone comes in Red and Golden color scheme which matches with the colors of Iron Man suit. To give it a superhero feel there is Iron Man’s mask on the back. Apart from the looks, the specifications of the phone is identical to the regular Galaxy S6 Edge. The phone comes with a pre loaded Iron Man theme, which is pretty cool but you can switch to the default Galaxy theme if it gets too much Iron Man for you.

The phone comes in an awesome looking Red box which itself looks like a collector’s item. Apart from the phone, box includes an Arc Reactor style wireless charger to match with the look of the phone. You also get a clear plastic cases for your phone. All the accessories of the phone are packed in black little boxes.

Unfortunately, the press release mentions only South Korea, China, and Hong Kong in its official announcement. The device will go for sale on 27th of May. Countries other than those mentioned in the press release might get this phone in near future but as it is a limited edition phone, worldwide launch seems unlikely. Price of the phone is still not revealed.

Following is the press release from Samsung. 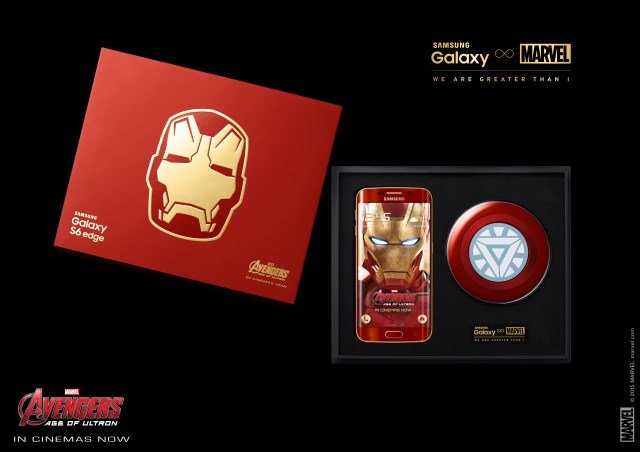 Samsung Electronics Co., Ltd. today announced the Galaxy S6 edge Iron Man Limited Edition in collaboration with Marvel. Samsung and Marvel have come together in celebration of the technological innovation and creative visual storytelling in Marvel’s Avengers: Age of Ultron to introduce this limited edition of the Galaxy S6 edge.

“We are excited to be able to offer our world-class Galaxy S6 edge smartphone designed especially for Iron Man fans through our continued collaboration with Marvel,” said Younghee Lee, Executive Vice President of Global Marketing, IT & Mobile Division at Samsung Electronics. “The limited edition Iron Man Galaxy S6 edge embodies the power of the iconic Avenger with a dual-curved edge design and advanced features that will provide Marvel fans with the ultimate entertainment experience.”

The Galaxy S6 edge Iron Man Limited Edition package is equipped with a vibrant red and gold Iron Man-themed Galaxy S6 edge including 64GB of storage and matching wireless charger, as well as a clear cover that enhances the device’s exclusive design.

The Galaxy S6 edge Iron Man Limited Edition will be available in Korea on May 27, 2015, with China and Hong Kong in June.

Full details and product images are available at www.samsungmobilepress.com or www.samsung.com/global/galaxy/avengers/