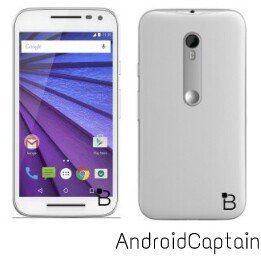 Moto G’s photos were leaked earlier but this time, photos reveal the proper look of the device. We can see that phone’s design have been modified to give it a premium look and a textured back.

There’s no word on the features yet but it’s more likely to feature a 5 inch 720p display, Snapdragon 410 chipset, 1 GB RAM and 13 MP and 5 MP camera on back and front respectively.
Moto G 3rd Gen. might get launched in the last quarter of 2015 and it might also run on Android 5.1.1 out of the box.