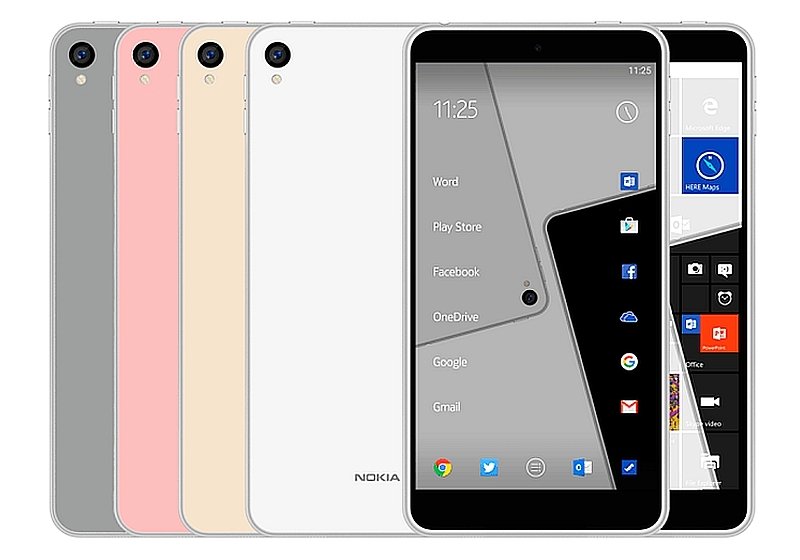 Nokia C1, which is supposedly going to be the first smartphone with Nokia branding after the acquisition on the Finnish company by Microsoft, is now again making news with new leaks of the rendered graphics of the device. While the previous leaks showed Nokia C1 running Android, this new leak shows another version of the phone running Windows 10. The image doing rounds on the web suggests the possibility of two versions of Nokia C1, one of them running Android with Z launcher and the other one running Windows 10.

The rendered image shows the Nokia C1 handset in 4 different colours namely, White, Gold, Pink and Grey. The phone on the foreground shows it running Android on Nokia’s Z launcher and the phone which is in the background is shown to be running on Microsoft’s mobile OS, Windows 10. The tipster indicated that C1 is going to arrive in two variants running two different operating systems.

However these are still to be considered as a rumor as there has been many leaks in the past that has surfaced on the internet about Nokia C1 but there are many differences among these leaks so it is hard to decide which one is genuine.

It is worth mentioning that Nokia can not release any smartphone with its banding before the third quarter of 2016 as the contract with Microsoft restricts it from doing this. Earlier this year, Nokia CEO Rajeev Suri has said that Nokia will start bringing smartphones in 2016. But Nokia will not produce these phones by themselves, instead they will design the devices and provide licensing and brand name to the phones produced by other manufacturers. This is the same strategy that they adopted when they launched their Android tablet N1.

So it is certain that Nokia C1 is coming but to be sure of its specifications and other features we will have to wait till the last of year 2016.