The Realme Buds Air are scheduled to launch on December 17 and will go on sale before December 24. Given Realme’s pricing strategy, we expect them to be priced quite aggressively. It won’t be a surprise if the price of the Realme Buds Air will be under INR 5,000. Realme is currently offering an INR 400 coupon for the earbuds to users who sign up on the ‘Notify Me’ page. Additionally, users buying the Realme X2 Pro, the Reame XT, the Realme X, Realme X Master and the Realme 5 Pro between December 9-16 will also get an INR 400 coupon for the earbuds. 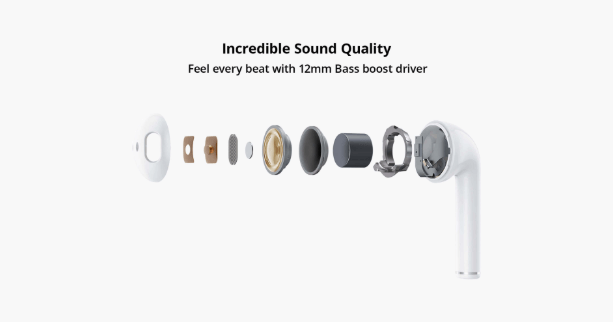 A new leak surfaced today confirming the existence of new affordable Realme true wireless earphones. The new hearables will be an alternative over the Realme Buds Air and will be named Realme Buds Air Neo. Apart from its more affordable nature, the new earphones will also offer extensive battery life with up to 17 hours of usage on a single charge and Bluetooth 5.0.

So with good battery life and recent Bluetooth standard in tow, where exactly is Realme cutting the corners? Apparently it will be in the lack of wireless charging and in the choice of a micro-USB port standard. The other features are coming from the original Buds Air. That includes the custom R1 chip, 13mm audio drivers, and the support for Realme Gaming Mode that ensures low-latency in audio streaming.

Despite the leaked details and the images, Realme is yet to point an exact launch date. However, the new hearables may go official along with a new smartphone on May 25. The company will be launching eight products in China on that date. Worth noting that we also expect the new affordable Realme Buds Air Neo to make way to India eventually. After all, Realme wants to build its presence there as a lifestyle brand.